by Karen Mal & Will Taylor 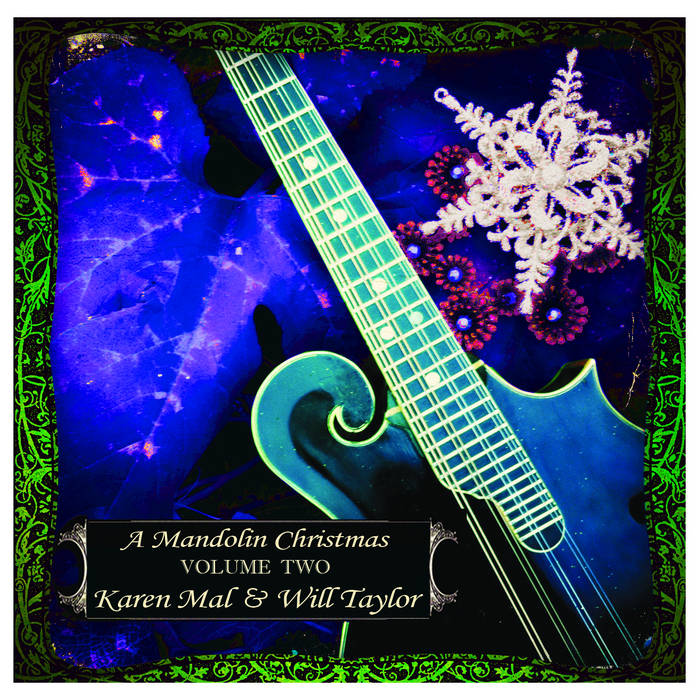 Will Taylor Love the arrangement! Favorite track: Dance of the Sugar Plum Fairy.

Volume Two of "A Mandolin Christmas" digs a bit deeper into the traditional Christmas canon. And a little farther back in time. Some of these velvety melodies are centuries old. There's a remarkable, almost mystical quality in these ancient carols: they carry the mood of Christmas, even the less widely-known ones, embedded in their very fabric somehow.

In our modern high-speed digital culture, Christmas music is maybe the only "popular music" still rooted in the Middle Ages, and also in acoustic instruments. These arrangements are at once simple and yet sophisticated. The crystalline tone of Karen's mandolin with Will's jazz-infused classical guitar serve this music so elegantly. You can almost hear the fire crackling and see the lights twinkling on the tree. There's a wealth of fantastic, more modern Christmas music as well, but no matter how progressive we are in our other musical tastes, there's still a wide appeal for these old carols. They immediately invoke all Christmases past. They remind us and inspire us of the sense of well-being from our own childhoods, and that of our children's.

This is a record that will be a lovely accompaniment to any holiday atmosphere. It has a sound that warms up a room instantly and still leaves space in the air for both lively conversation, and the serenity that comes from taking a break from the bustle of our every day lives.

Will recorded, mixed, mastered and generally magicked this recording into life. .

Will plays guitar, Karen plays mandolin: it doesn't get any more "duo" than this. Together we came up with arrangements, harmonies, design ideas and the mission of sharing the beauty of acoustic Christmas music, and the sense of well-being it inspires and reminds us of.

Extra special thanks to Patrick Fernandez and Joyce and Kent Walker

The Songs - History and arrangement notes

I inserted in the middle a gypsy jazz version of Auld Lang Syne in a minor key
Bigger reverb because I wanted to emulate the orchestral version
The piece was noted for its use of the celesta, in which the mandolin parts replace in this version

The Angel Gabriel is a Basque Christmas folk carol from 13th or 14th century.

Carol of the Bells is a Christmas carol, by Ukrainian composer Mykola Leontovych in 1914

In Dulci Jubilo ("In sweet rejoicing") is a traditional Christmas carol dating from the Middle Ages.

Good King Wenceslas / Go Tell it on the Mountain is an African-American spiritual song, compiled by John Wesley Work, Jr., dating back to at least 1865

Watchman, Tell Us of the Night by John Bowring

O Holy Night is a well-known Christmas carol composed by Adolphe Adam in 1847 to the French poem "Minuit, chrétiens" (Midnight, Christians) written by a wine merchant and poet, Placide Cappeau (1808–1877)

Artwork by Laurie McClain
Mixed by Will Taylor and Patrick Fernandez